An old one, as I’d let the blog go several years ago, but just found this one by chance so thought I’d add it in here.

‘Practices perceived as unconventional are too often stigmatised. There is no such thing as ‘normal’ when it comes to consenting adult sexuality.’

How did you end up being a domme?

‘Kink was something that always fascinated me and I crossed over into the fetish scene from goth and cosplay.

‘Friends of friends began to contact me privately for sessions before I ever advertised as a pro-domme.

‘My career started almost by accident, but it’s something I love and will continue to do for as long as I’m able.

‘I am also a writer and illustrator and am now privileged enough to be able to take months out from pro-domming if I have a big project on the go, but I don’t ever see myself stopping entirely. It’s who I am.’

Where does the law stand re domme work?

‘UK law is tricky about what does or doesn’t constitute sex work.

‘Sex workers are all equally stigmatised (and put in danger) because of the legislation around how many of us can work together in one place without it being classed as a ‘brothel’.

‘The proposed criminalisation of all clients – the ‘Nordic Model’ – would push our work underground, making the most vulnerable of us take greater risks for less money and undermining our safety.

‘Solidarity is important. Whatever our circumstances – whatever kind of sex work we do and whatever reason we have for doing it – we deserve the same rights and safety as workers in any other industry. ‘The law should protect us, not harm us – this can only be achieved through full decriminalisation, destigmatisation and unionisation.’

Is there a typical client?

‘No! The stereotypes you see on television of rich old bankers are largely inaccurate (unless that’s the demographic you specifically choose to market to – some dommes specialise).

‘Most of my clients have been men, but not all. I choose clients depending on how compatible we are.

‘If they have the wrong attitude, or have interests outside of what I enjoy, they don’t get to meet me.’ Do your friends and family know about your work?

‘I’m largely ‘out’ to friends and family, which is a privilege that many don’t have.

‘I have had problems in the past due to people’s misconceptions about kink and sex work which just makes me more determined to challenge the media misrepresentations of who we are and what we do. We are real people, not stereotypes.’

Here’s some guest art I did for a deliciously NSFW post at @GirlOnTheNet’s blog. Click here to read. 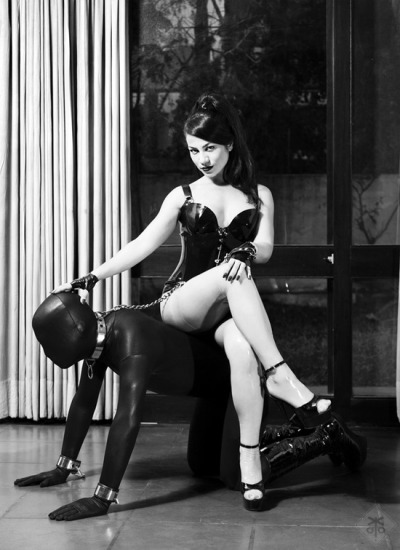